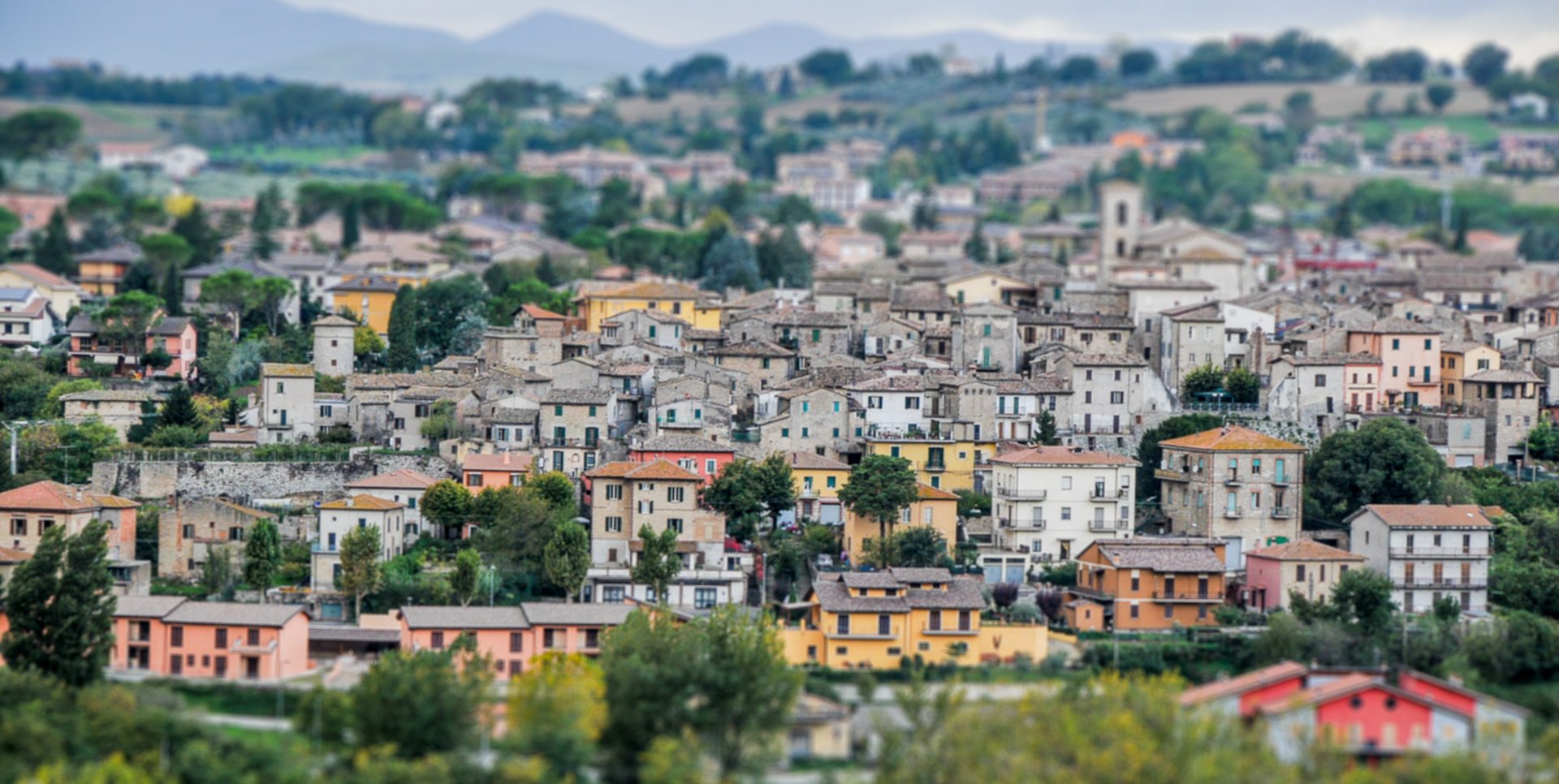 Acquasparta is a small medieval hill town and commune in the province of Terni, Umbria, in central Italy. It is located on a hill (320m above sea level) above the Naia Valley and the river of the same name, facing the Monti Martani mountain range. It also sits between two thermal springs, the Amerino and the Furipane.

The name’s origin is traditionally connected to the Roman toponym of Aquas Partas “divided waters” or “between the waters”, about which, however, no documentation exists. More probably, the name stems from the presence of several different water sources in the area. During the ancient Roman domination, the area was a retreat – a spa whose mineralized hot water baths were easily accessible from Rome along the west branch of the Via Flaminia.

Acquasparta, a small town of population approx. 5000 is situated very close to the better-known towns of Todi, Spoleto, and Terni, to name but a few. It is a vibrant, alive town with a good range of restaurants, bars and shops and also a good mix of age groups and families. “I say this because in our experience we have found many of the small Italian towns can be little more than ghost towns most of the time.”

When you drive into Acquasparta you will arrive at the “centro storica”, the medieval town centre. The main piazza is Piazza Federico Cesi, which has just (August 2006) been fully restored. Casa Lilla is a 19th-century town villa built onto the outside of the old town walls and you can walk through the picturesque back streets of the town to Casa Lilla. Inside the old part of town, the principal building of note is the Renaissance style Palazzo Cesi, started in 1564 and completed in 1579 by the architect Giovanni Domenico Bianchi. Since 2014, The Palazzo was given back to the Comune of Acquasparta by the University of Perugia and is in improving condition.

Acquasparta is home to a number of churches, including the San Francesco, built in 1290, essentially Romanesque but with a Gothic architecture facade, and the Church of the Madonna of the Cross, dating to 1606. The Church of the Sacred Sacrament, incorporating a Roman Mosaic in its floor, is a very good example of 17th-century church architecture.

Santa Cecilia was built in the 1500s and contains an elegant chapel in which lies the tomb of Frederico Cesi. Santa Cecilia is the patron saint of Acquasparta. The first knowledge of Acquasparta goes back to the end of the 8th century AD (circa 990), when it entered the Arnolfe lands with Cesi and Sangemini under the jurisdiction of the Farla abbey and of the bishops from Todi in 1278, In 1517 it passes under the direct government of the Church. During fueds between the Guelfics and Ghibellines, Acquasparta suffered heavy devastation. In 1609, Prince Federico Cesi established in the ducal palace the first European Scientific Academy which hosted many famous scientists, among them Galileo Galilei.

Acquasparta is very well situated in southern Umbria and for anyone wishing to explore the treasures that this area has to offer the discerning tourist, one of the primary roadways of Umbria the E45 autostrada is only 5 minutes from the town and Acquasparta also has its own railway station.

The capital city of Umbria, Perugia is only 35 mins away by car, with its magnificent medieval centre, fantastic shopping, restaurants, cathedrals and churches it is a must-see for any visitor to this region. Perugia is one of our favourite cities in Umbria and Tuscany and you can read more about it in our About Umbria section. Another favourite is Terni, just 15mins away by car from Casa Lilla. Terni is great for shopping with very easy access.

The Roman ruins of Carsulae are located along the original Roman road the Via Flaminia, an important communication road of the Empire that joined Rome to the Adriatic sea. This Roman municipality which was founded after the opening of the important consular road (circa 3rd Century BC) was enlarged afterwards not only because of its favourable position along the Flaminia but also due to the beauty of the place, mentioned by Tacitus and Plinio il Giovane and is only 10 mins by car and well worth a visit. And remember all the drives are through the stunning countryside of Italy’s green heart, Umbria.